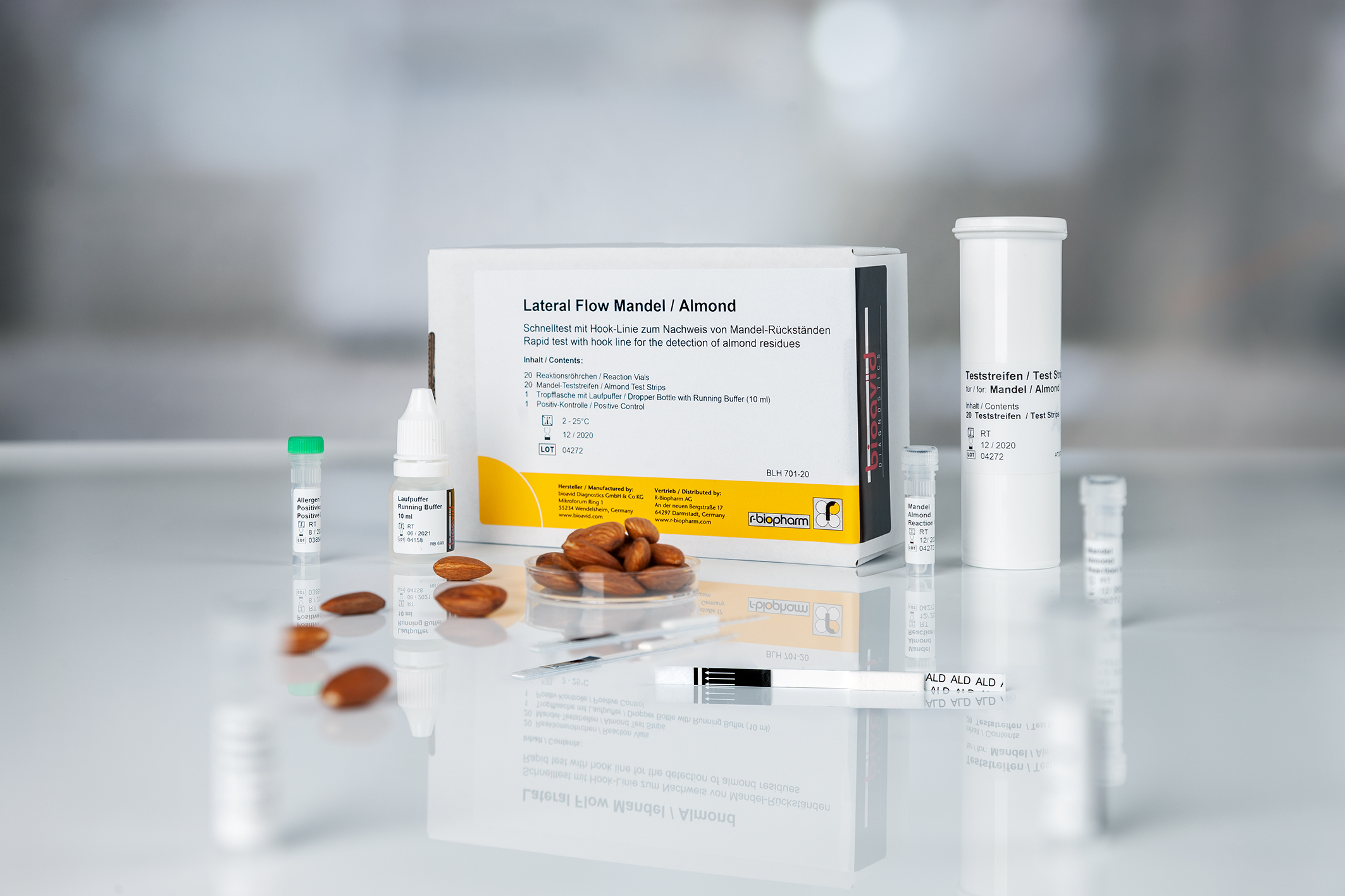 The Lateral Flow Almond incl. Hook Line from Bioavid is an immunochromatographic test for the qualitative detection of almond residues in environmental samples (e.g. in food production lines), CIP-water and food samples. The assay is applied for the detection of small amounts of almond contaminations.

Unfortunately, very high amounts of an analyte in the sample can lead to falsely lowered or negative results – called the hook effect. The new dip-sticks will include an additional line, the hook line, in order to detect this effect. For now, the new test (BLH701-20 Lateral Flow Almond incl. Hook Line) will not replace the old one without a hook line (BL601-10 / BL601-25 Lateral Flow Almond), but it is an additional product offer with new functionality.

Almond (Amygdalys communis) is one of the most popular tree nuts worldwide. Almonds are consumed as snacks and are common components of many bakery goods. The almond is available as a sweet almond, with a rough, cinnamon-brown skin, which is mainly used for raw consumption as well as for baking and in the production of marzipan and liqueur. Before consumption, the almond is scalded in hot water, so that the slightly bitter tasting skin can be easily dissolved. Dried again, they can be processed into flour or grated and split. Apricot kernels are partially used as cheaper alternative to almonds (e.g. perzipan instead of marzipan). Typically, apricot kernels cross-react in immunobased almond assays and cannot be differentiated from the almond allergen. Almonds belong to the family of Prunidea and are closely related to plums, cherries, apricots and peaches. Generally, the allergen can be present as an ingredient or as a contamination in raw and cooked products. Nuts in general are highly potent allergens and can induce slight skin reactions and gastrointestinal symptoms. In some very sensitive allergic patients, an anaphylactic shock may occur. Almonds have a high protein content of approx. 25 %. Approx. 95 % of almond proteins are water soluble making them a very dangerous cross contaminant in production lines. Until now, there is no cure for food allergies. Therefore, it is even more important to avoid cross contamination, which can lead to accidental consumption of almonds by allergic patients.
According to the regulation (EU) No. 1169/2011, almond must be declared on food labels as it can induce allergic reactions. Similar regulations exist e.g. in the USA, Canada, Australia and New Zealand.