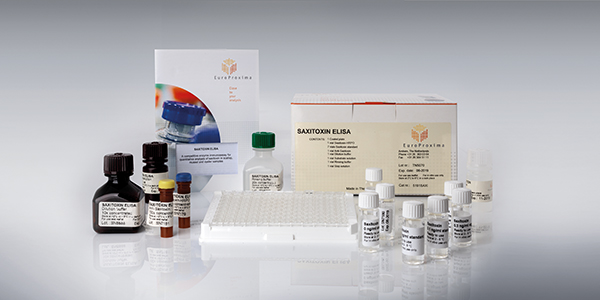 EuroProxima Saxitoxin is a competitive enzyme immunoassay for the screening and quantitative analysis of the shellfish poison saxitoxin in various matrices.

Marine biotoxins, also called phytotoxins or shellfish toxins, are naturally occurring compounds produced by algae and phytoplankton. Under normal conditions these compounds do not cause any problem. However, high concentrations of shellfish toxins can accumulate in filter feeders such as clams, mussels, and oysters causing illness amongst people who eat them. There are four syndromes called shellfish poisoning: paralytic shellfish poisoning (PSP), neurotoxic shellfish poisoning (NSP), diarrhetic shellfish poisoning (DSP) and amnesic shellfish poisoning (ASP). PSP is caused by a wide number of derivatives of saxitoxin (STX). STX is one of the most potent natural toxins known and acts as a selective sodium channel blocker. The term saxitoxin can also refer to the entire suite of related neurotoxin produced by these microorganisms, such as pure saxitoxin (STX), neosaxitoxin (neoSTX), decarbamoylsaxitoxin (dcSTX) and the gonyautoxins (GTX).
In the European Union, Regulation (EC) No 853/2004 stipulates that live bivalve mollusks must not contain PSP toxins (saxitoxin and analogues) in total quantity (measured in the whole body or any part edible separately) that exceeds a limit of 800 μg/kg (ppb).

The EuroProxima Saxitoxin ELISA is a competitive enzyme immunoassay based on antibodies directed against saxitoxin.