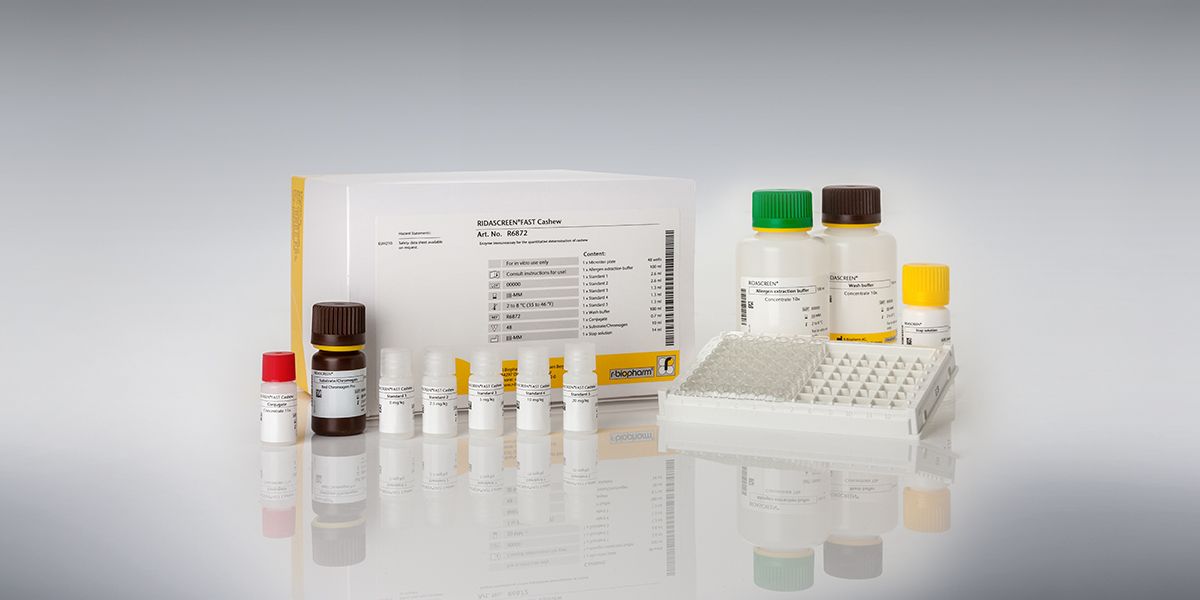 The RIDASCREEN®FAST Cashew is a sandwich enzyme immunoassay developed for the quantitative analysis of Cashew in food. Exemplarily for the food groups pastries and sweets have been tested during the assay’s development: cookies, chocolate and ice cream. The assay can be likely used for analysis of other food samples too; this has to be checked by the user.

Cashew proteins can be present as an ingredient or as a contamination in raw and processed products. According to the regulation (EU) No. 1169/2011, cashew must be declared on food labels as it can induce allergic reactions. Similar regulations exist e.g. in the USA, Canada, Australia and New Zealand.

The cashew tree (Anacarddium occidentale) produces the cashew apple and cashew kernels. The cashew kernels contain a protein portion of approx. 18 % and a fat portion of approx. 45 %. Despite this high fat content, cashew is very rarely used for oil production. Some of these proteins, like the vicilin Ana o 1, the legumin Ana o 2 or the albumin Ana o 3 are known for being allergenic. Many of them are heat resistant making them stable to different production processes. 60 % of cashew is consumed as snacks, remaining 40 % are used in candies. Like many other “tree nuts”, cashew is botanically no real nut. However, due to its similar composition and taste to real nuts, cashew is considered as nut in the culinary meaning and is usually referred to as tree nut. The presence of undeclared cashew is a potential risk for cashew allergic patients. The tree nut allergy is the major allergy worldwide. Beside walnut, cashew is the second most common tree nut allergy. Cashew is a very potent allergen and has to be avoided by allergic patients.